THE CHURCH OF LOVE & TRUTH 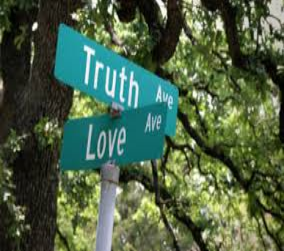 THE CHURCH OF LOVE AND TRUTH

The two great identifying marks of the church is LOVE and TRUTH.
The last few decades have brought with them a vast change to many religious groups who classify themselves as Christian organizations or as the Lord’s Church. The change that we are talking about here is not a good change. We are referring to a departure from the biblical principles that are prescribed in the Holy Bible. A drifting from God’s word has begun and it seems to be continuing to pick up momentum. God’s word is clearly under attack. Today we think of liberalism being in the secular world but liberal ideas also exists in groups that classify themselves as Christian.

Apostasy (a departure from the truth) is one of the more significant signs of the end time and yet many fail to associate it with the last days. They connect the proliferation of sin that they see in the world with signs of the end time but say little about the departure from truth by those who profess Christ, as being an end-time sign. The last days will experience a falling away of many who have professed to know God. This is a bible declared truth and all Christians should understand this. (Read I Tim. 4:1) Not all will surrender to the evil one’s deception though. In the end God will have a church that will have remained set apart and standing firm upon His word. (Matt. 16:18)

God will have a church that will not bow to political correctness nor to the threat of persecution. Neither will His church be swayed by what is the most popular ideology of man. She will seek God’s endorsement and not the world’s. Too many groups and individuals are being influenced by the wrong thing and are starting to resemble the world more so than the Lord. The testing time on who will stand appears to be here and many do not seem to understand it. I do not say this with harshness of spirit but to alert us of what is going on around us. There are many precious saints who have not bowed a knee to the evil and the pressures of the day but sadly some have already fallen in the battle.

The thing that has attracted me to The Church of God through the years has been her commitment to the truth – her willingness to walk in the light of God’s word as He reveals it to her. I love this about the church and I also know that in order to continue to be His church that there must remain that kind of commitment to His word. There has been times in The Church of God when divisions arose and some became willing to part with foundational truths that had been held for years but there have always been some who would cling to the “Blessed Ole Book” and carry on with those of like mind – those who were committed to the truth. Those divisions have scattered abroad many precious sheep but God is able to gather what the enemy has scattered. In fact God will gather His sheep at some point in time according to St. John 10:16 and other passages. Oh what an event that will be!

Today there are people in various organizations wondering where the church is that they were once a part of. The change that we first mentioned has come and affected their surroundings. People from various groups talk about the decades past as if they wished those days were still here. It was a day for them when holiness of life was preached and a commitment to the truth was evident. There was an assurance for them that they were a part of God’s program on this earth. They witnessed outpourings of God’s Spirit and the church work that they were a part of grew in number. There is a desire in many people’s heart to return, not to those days but to those Holy Ghost services, to holiness preaching and to God’s assuring presence. It was a failure to contend for the faith and walk in the light of God’s truth that caused those times to cease and where they have ceased it will take a renewed commitment for them to return.

A departure from the truth is not the only area where the enemy has targeted. The scripture says that in the end time the love of many shall wax cold. (Read Mat 24:12)  It reveals that during this time that even some parents will hate their children and some children will despise their parents. A heightened lack of love like the bible describes for God and one another is a sign of the end time but one place love will still be found will be in God’s church. You will always find God at the intersection of LOVE and TRUTH and that’s where the church must be too. While it is commendable and admirable and even necessary that people have committed themselves to stand for the truth, the ingredient of love must also be present. Godly love cannot be absent from a person’s life or from the church if He is going to be in their midst.

One of the things that attracted the disciples of the Lord to Him was the fact that He did not have the pious demeanor that many of the religious leaders of the day had. They saw in Him someone that genuinely cared for others and who did not display the self-centered character that they saw so much of in the religious sects around them.

Genuine love such as Jesus had will appeal to people in any generation and Jesus himself said, “By this shall all men know that ye are my disciples.” (St. John 13:34-35) Church of God “WE MUST HAVE LOVE.” Love is to be our most fundamental attribute. Without it we cannot be His.

Do you remember the old song “Give me that old time religion” and the part that says “makes me love everybody.” That is the kind of religion that the church must have to get us where God wants us to be. That’s the kind of love we preach about in the Church of God and the kind I am feeling around about me now.

The church is to be His image bearer. We are to be His body, His voice and a representation of who He is. We are to be an expression of His love to others in both word and deed. The church cannot be His church without such love as Jesus had. I remember my early days in the Church of God (over forty years ago now) how that there was such special love among God’s people. There is no doubt in my mind that it was that love that helped win me to the church. Much like the disciples were drawn to the Lord because of His care for them, so I was drawn to the church because of that same kind of love.

Something is moving in my spirit lately. I feel a freshness, a new wave of excitement and I know that I am not alone in my feelings. From what others have shared with me, they are feeling the same thing. Not only is there excitement in the air but there is an assurance that has come with it, that God is in the midst of her. (Psa. 46:5) The Church of God has taken on a new impetus. She is looking for men and women who are committed to God and His plan for the church in these last days. She is looking for people who are committed to the truth and are willing to contend for the faith and who loves others as Jesus did.

If you are one of those who are committed to the truth and long to feel the love of Christ in the church, but now feel a little out of place where you’re at, I believe you could feel at home in The Church of God.

Books of the Bible

Please feel free to call, write or email us if you have any questions about The Church of God.

Location of The Church of God headquarters